The Kindergarten Schmetterling opened its first kindergarten group in September 2002 in the Cottage quarter of 1190 Vienna near the “Linneplatz”. The group was housed in a former embassy building and had the name “Rainbow Group”. The choice of building as well as the group name (the rainbow is a symbol for harmony, entirety and nature conservation) were pioneering for the further development and main emphases of the Schmetterling concept.

After the first kindergarten year, a cooperation with the tavern Wolff was concluded and the kindergarten business moved to Neustift am Walde with a new address: Rathstraße 42, 1190 Wien. Through this, an old tavern-premises was adapted and extra space for a nursery group was generated. Since back then the demand for free spots for children under the age of three kept getting bigger, the decision to convert the kindergarten group into a family group was set into motion. 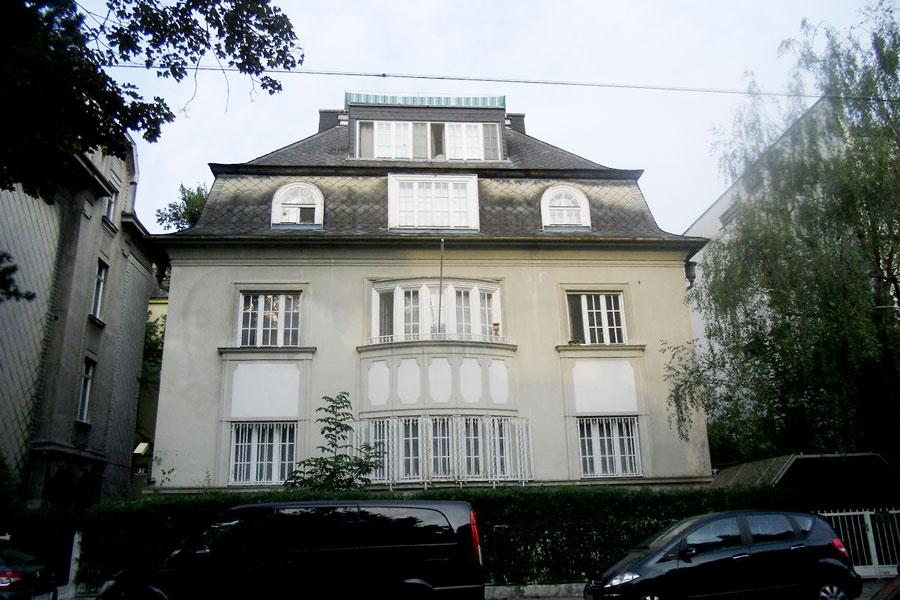 From September 2003 until August 2009 a family group and a nursery group were run at the Rathstraße 42, 1190 Vienna location. The garden, belonging to the building and set on terraces, created a pleasant atmosphere for both children and caregivers.

In the year 2009 the local council decided for the creation of new kindergarten places for private kindergarten owners. Kindergarten Schmetterling established, together with other operating associations, a sponsoring association “Vindobini” in the summer of 2009 in order to present themselves jointly to the City of Vienna and to create synergies between them.

In September of 2009, Kindergarten Schmetterling officially opened two kindergarten groups and expanded the location by adding the space where the “old post office” and a gym room in the cellar was. The Dorn family along with some friends renovated the cellar all on their own.

In 2009, the Dorn family revised the pedagogical concept of the kindergarten and made bilingualism and the Montessori education a central topic. For the general (vocational) training and further training of employees, we worked closely together with Claus-Dieter Kaul (an internationally acknowledged Montessori pedagogue). 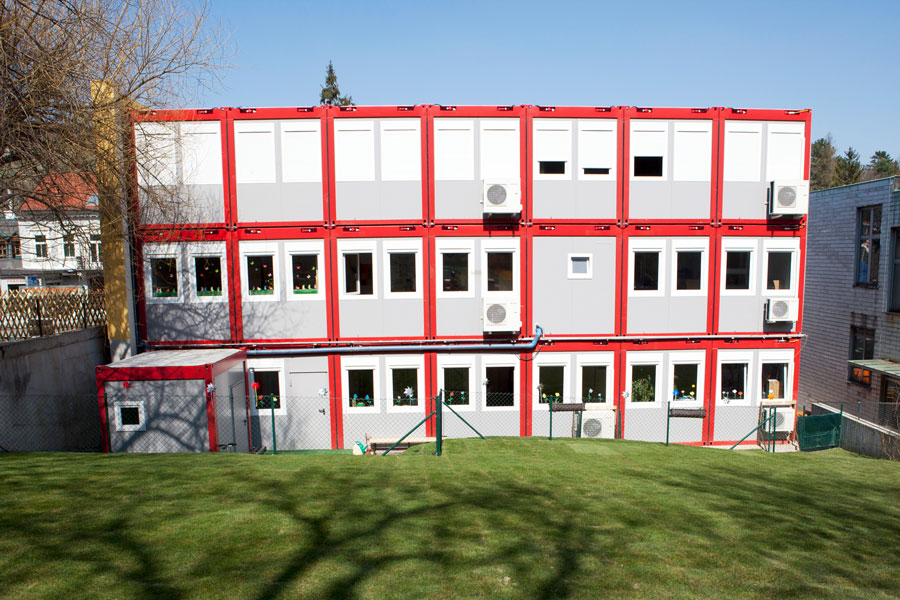 The location in Rathstraße 42, 1190 Vienna gradually became too small and could no longer satisfy the growing requirements of a modern building. The great number of requests from parents led to the Dorn family’s decision to invest in a sustainable project and, in consultation with the City of Vienna, to put a new location into effect. Container villages were built in Rathstraße 25, 1190 Vienna as a temporary solution to accommodate the kindergarten from January 1, 2011, until December 31, 2012. Due to the continuing number of requests, three additional groups were opened in the container villages and ultimately two kindergarten, three family, one toddler and one nursery group were run. Furthermore, a toddler group in the Neustift branch at the Rathstraße 11, 1190 Vienna address was opened up for the period of September 1, 2011, until December 31, 2012.

The first time the project Fresh Kitchen was implemented and food was freshly-cooked everyday for the children was in the container villages. After the first few culinary attempts, a well-trained cook (Kevin Eigl) was sought after and eventually found in the year 2012. Sir Eigl successfully completed his cook/chef training in France and cooked in many places in Vienna including the Palais Coburg. Together with Sir Eigl, Kindergarten Schmetterling developed a well-balanced food concept that matches the children’s needs and stages of development. A main focus is placed on the products being seasonal, regional and organic.

The new pedagogic concept (multilingualism, Montessori emphasis, freshly prepared food…) led to even more requests, in which the Dorn family decided to open a second location. After a short intensive search, they found a location in Heiligenstädter Straße 50-52, 1190 Vienna. The kindergarten with a family and toddler group opened on September 1, 2011. The location was picked only as a temporary arrangement for two years, and due to the amount of requests, was fully booked within a few weeks.

The search for a long-term location ultimately led to an office building in Heiligenstädter Straße 26-28, 1190 Vienna, only a few minutes walking distance from the station Spittelau and across the Schlumberger park grounds. In order for the children, parents and employees to feel comfortable in the long run, the Kindergarten Schmetterling completely renovated and modernized the two-story rental space. The four groups (three family and one toddler group) opened on September 1, 2012.

The spacious gym room, possibility to use the Schlumberger park grounds, the optimal public transport connections, the modern and bright rooms, and the room concept made this location equally liked by children, parents and employees all the same. 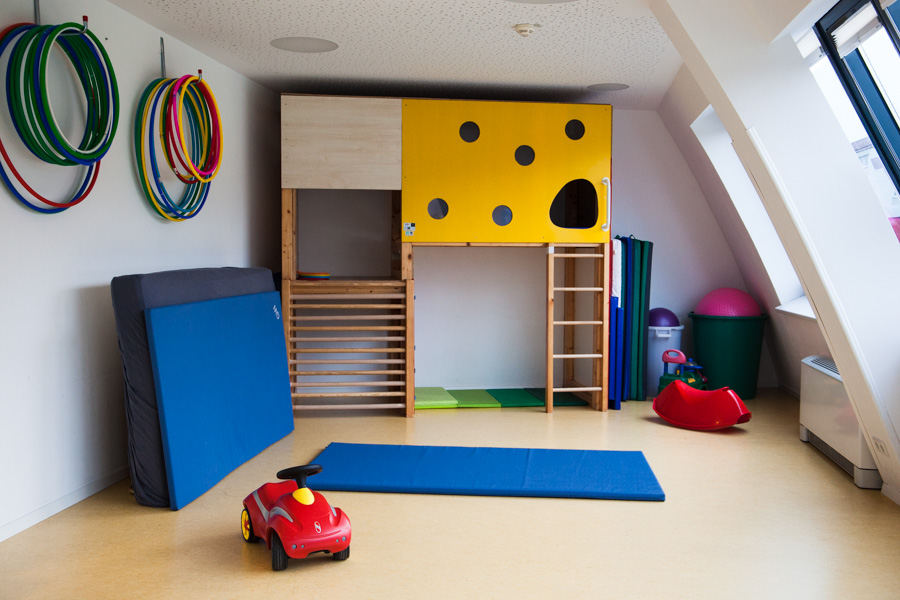 The temporary solution of the container villages ended on December 31, 2012. An option for a long-lasting location in Neustift am Walde had been searched for starting already in 2011. Together with an experienced project developer, the idea of having Kindergarten Schmetterling be the tenant of the location in Rathstraße 6-8 was developed and put into action in the year 2012. The property is divided between Billa and Kindergarten Schmetterling. 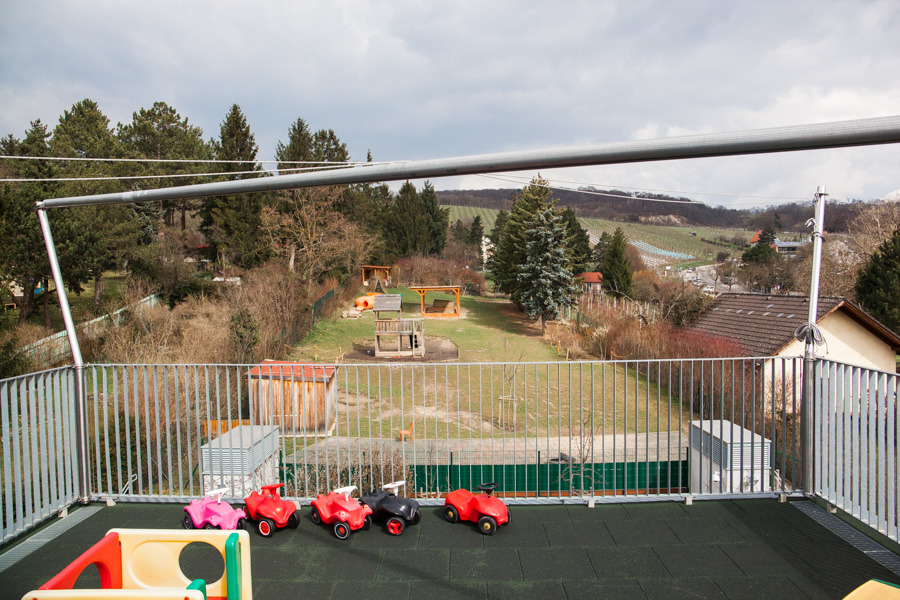 On January 1, 2013, the location for ten groups, split up on three floors with around 1,500m² inside area as well as 1,500m² terrace and garden space opened up. The garage, belonging to the building, is an optimal way to pick up and drop off your children with the car. Three public transport buses also stop in close proximity to the building.

The Kindergarten Schmetterling could play an active part in planning the rented property, and together with an experienced architectural office, design a modern and ample location. Of particular importance, were setting up the central cloakrooms on each floor, the large and bright rooms, a floor heating system, applying an electronic access control system, adequate movement capacity and much more. The morning snack, lunch menu and afternoon snack are freshly prepared everyday in the big industrial kitchen.

On the lookout for a useful expansion, the location at Heumarkt 23, 1030 Vienna was taken over from former Old Vienna and a temporary creative club in October 2017. The aforementioned location is housed in a classic Viennese old building and expands over two levels. The majority of the original staff could join the kindergarten. We take care of the children at this branch in five groups (two nursery groups, two kindergarten groups and one family group).

In close proximity one can find the Modenapark, the Belvedere Garden, the Resselpark and the Stadtpark; these are visited several times a week. Using public transport (several underground and railway lines are within walking distance) or driving with the car (hardly used cul-de-sac) is an optimal option for picking up and dropping off your children.

A fourth group, a family group, was opened in March 2018 and in September 2018 we opend last but not least the fifth group, another kindergarten group. 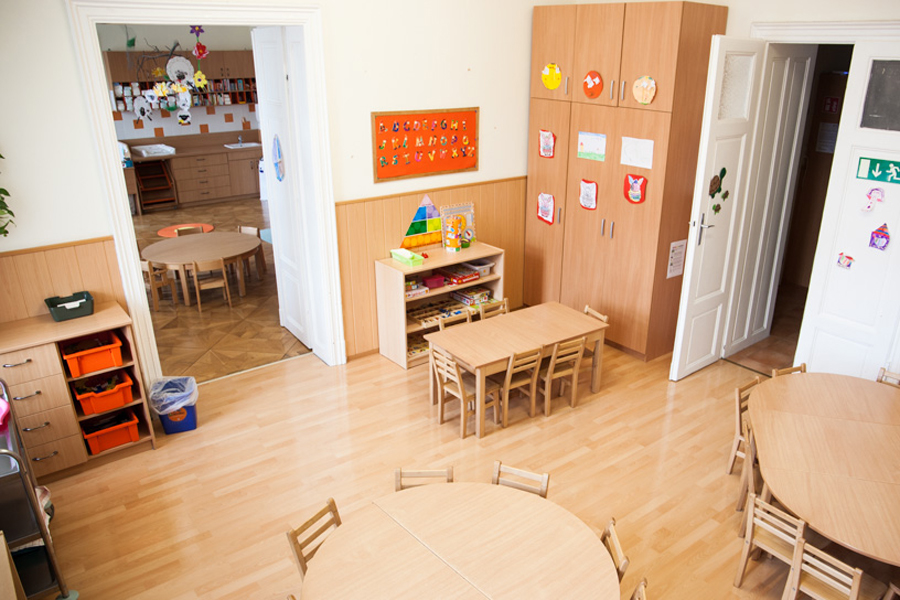 By chance, Schmetterling came across a vacant property in the 17th district of Vienna. In the near past, the property housed a bank and a group of children. The building is a solid brick construction and can be described as a building from the early founding period with a long street wing and a central courtyard.

The kindergarten consists of two units. One unit consists of the two nursery groups, each with two escape routes. A panoramic glass dome provides ideal lighting conditions here. The other unit, which forms the main part of the kindergarten, is located in the former premises of Bank Austria. Although these two units are structurally separated from each other, they are both connected via the inner courtyard or a spacious pavement in front of the building. The main part of the kindergarten houses the kindergarten group, the office of the management, the pram storage room, the kitchen, the staff room, one parent and one staff toilet each, a movement room (which will be extended as a family group) and storage rooms.

In order to ensure that the kindergarten can be operated long term under optimal structural conditions, the building was dismantled down to the shell and equipped with a great room concept, underfloor heating, new furniture, educationally valuable toys and an electronic access control system.

In August 2020 one of the nursery groups could be opened and in September 2020 the kindergarten group.

The kindergarten is located at Dornbacher Straße 89, 1170 Vienna, on the outskirts of Vienna. There are many green areas and parks all around and the Vienna Woods within walking distance.